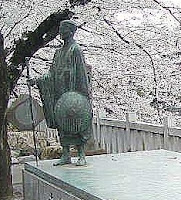 This episode of Basho revisited is the last episode about haiku from Oku no Hosomichi, The Narrow Road to the Deep North. In this part a haiku which wasn't included in Narrow Road, but was written while he was on his journey to the Deep North.
The haiku following now is a nice one and has also a reverence to his homosexuality. It's commonly known that Basho was a homosexual.
While Basho was staying at the Yamanaka Hot Springs, the 14 year old son of the innkeeper, Izumiya Matabel, attracted Basho's attention. He gave the boy the nom the plume Toyo (to = momo = peach) and (yo = the young beauty of). This name has a connection with Basho's earlier nom the plume "Tosei" (green peach) which forms a literary connection between the two, according to Oseka-san. However, other implications arise. Basho didn't choose to include the verse in his official travel journal but it was published in 1698, by Fukaku, a doctor in Kyoto, who made a book of 522 hokku classified into the season.


a peach tree
its leaves aren't scattered
winds of autumn

When we look closely to this haiku we can see the young boy to whom Basho was attracted, the peach tree, young, his leaves not scattered by the autumn wind. He is strong, this haiku glorifies the young boy and his looks.
It's surely a wonderful haiku with a strong touch of love in it. Basho admires Toyo for his young beauty and maybe ... was in love with him.
But ... his love for Toyo isn't the important item in this haiku. It's the haiku which is important. It's a well balanced haiku and surely one in which Basho's master skills are very clear. I think this is one of his masterpieces.
It will be a challenge to write a new haiku for this episode of Basho Revisited. Can I do that? Will I succeed? Let's give it a try. 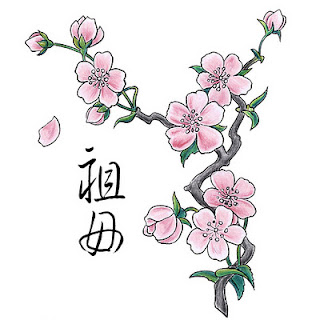 This was a tough one. It wasn't easy to write this one. It's for sure in the Spirit of Chevrefeuille, but is it also in  Basho's Spirit? You, my dear visitor, may decide that.

This was the last part of Basho Revisited about Oku no Hosomichi  The Narrow Road to the Far North.

In the following episodes I will look closer to other haiku written by Basho.