Basho Revisited, tears of a cuckoo

In this haiku of Basho which he wrote in the Summer of 1666, when he was 21 years of age, the 'hototogisu', a bird looking very similar with our cuckoo, is named for the first time in one of his haiku. At that time he wrote in a style that aimed at an elegant, humorous allusions to classical court literature, wordplay and wit, the style which belonged to the prestigious Teimon school of haiku. Writing haiku was just for entertainment for Basho at that time.


rock azaleas
have they been dyed by the red
tears of the cuckoo?

In the original Japanese haiku we see that in the third sentence Basho wrote 'hototogishu' in stead of 'hototogisu'. This technique was called 'kasuri' by changing 'hototogisu' into 'hototogishu' he refers to the cliche idea that when one cried for a long time the tears became blood. Source: Jane Reichhold

I love this haiku very much. In this I can see the young haiku master blooming. Can I write a haiku in the same Spirit?

I started writing haiku around the same age as Basho is in the above haiku. I am now 48, so I write haiku for, let's say, 25 years and I do love writing haiku as much as Basho did. Haiku is not only a poem, but (in my opinion) also a life style. So writing haiku is part of my life. Just like it was for Basho. I am breathing haiku.

Let me give it a try to write a new haiku in the same sense and tone as that of Basho.

such sadness
crying for a long time -
red roses blooming

Is this in the Spirit of Basho? I don't think so. It's more like ... Chevrefeuille :) What do you think? Let me know. 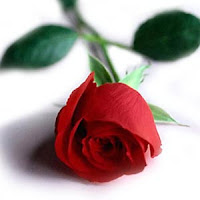 Until next time, than another haiku by Basho and one in his Spirit written by myself.