Maybe you know, maybe you don't know, but the Classical Japanese Culture had several great festivals, such as the 'Cherry Blossom Festival' and 'Tanabata', but they also had a big festival on September 9th. That festival was called 'Cho yo no Sekku', this means 'The Chrysanthemum Festival'.

The Chrysanthemum is a seasonword for autumn. I think Chrysanthemums are wonderful season bound flowers in so much different colours and species and they are a wonderful theme for haiku.

lingering moon
which is better this morning
early chrysanthemum

This haiku had a preface (very common): 'At Sodo's house. The chrysanthemums on the tenth. The elderly host of the lotus pond (Basho's host) loves chrysanthemums. Yesterday he held a party for the Chrysanthemum Festival just like that of Long Shan and today he offers the rice wine left over from our Renga party. I wonder who will stay in good health for next year's party!' (Source: Jane Reichhold's Old Pond)

This haiku was part of a Renga which Basho and his host Sodo composed. It's not sure if this was the 'hokku' opening haiku, but it could have been. 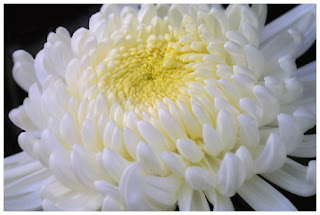 Chrysanthemums are beautiful. I personally love white chrysanthemums mixed with red roses. Maybe I will use that in my haiku for this part of Basho Revisited.

in the backyard
gazing at the Milky Way -
white chrysanthemums