In the Spring of 1688, when he was 43, Basho was still interested in youngsters. He himself became older and felt that his youth was over. In his haiku we can read the strong longing for his youth, but no one can turn back to his or her youth. Of course when an elderly man or woman becomes demented they go back to their childhood. Everyone knows that.
Basho also knew that, but his longing to go back to his youth was still strong.
As an adult I to think back to my childhood. I have had a wonderful youth, but ... to go back ... I don't think so.
As a haiku poet one can go back to that feeling of youth. It's easy, because I write a haiku of Spring and I am back in my youth. Spring is, in my opinion, synonymous with youth. Nature comes alive, trees began flowering again and than ... all those wonderful blooming cherry trees and plum trees giving me a sense of youth. I enjoy Spring as the season where in I can go back, by feeling of course, to my youth.
Basho also did this. He has written a lot of Spring haiku, the next ... also is a Spring haiku.


In this one 'the longing for youth' is essential. In the first two sentences it's clearly that he was longing for his youth. He thinks of the good times of his youth and got tears in his eyes.
On the other hand ... this haiku implicates his love for youngsters, especially boys (as we already know, Basho was homosexual). He sees the young boys, who are sad and have tears in their eyes. He would like to comfort them and wipe their tears away with his love and make them laugh again.
It's so touchy to see this haiku and picture it in front of your eyes. I think this is an emotional scene which he composed in this haiku. It's a sin I think, to write another haiku by myself in the same sense as Basho's, but I will give it a try.

such sadness
to see tears on young leaves
the bright sunlight

In this particular haiku tears are synonym with dew drops as you can see on the picture above.

With this haiku came (as was common in Basho's time) a preface or title. For this haiku the title was: 'Mourning over the death of priest Tando'.

Basho and Tando were close friends and he (Basho) was very sad, as you can read in this haiku, very sad when he heard that Tando had passed away. He weeps, while falling on his knees. Maybe with his hands before his face I think so. Tando had teached him some fundamental rules of Zen Buddhism, so Basho flourished after these teachings. He became the flower, but now his friend and teacher had died, the flower felt to the ground closer to the root. He wept for his friend in farewell and wrote this haiku. 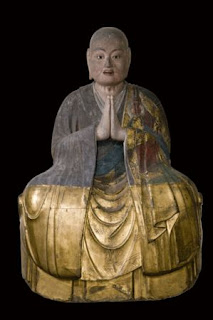 As I introduced this new Special prompt on Carpe Diem I wrote already a new haiku inspired by this one. That haiku was the following:

A nice haiku I think, but not a strong one. So I will try to write another haiku inspired on the one by Basho.

shedding tears
my dearest friend and teacher
has gone to heaven

This was a new Basho Revisited, shared with Carpe Diem a daily haiku meme. It's open for everyone who loves to write haiku (classical or non-classical) ... come and visit, see for yourself and maybe you're inspired to write a haiku ... enjoy the fun ... and share your haiku with Carpe Diem.

This episode I will look closer to another not so wellknown haiku written by 'my master' Matsuo Basho. This haiku he wrote in the Summer of 1683. In that time he used the Kanshicho-style He called it 'in the spirit of the Chinese verse', in that style he didn't used the strict syllables-count of the classical haiku, 5-7-5. He wrote in this style 'till 1685. He even did re-write Kanshicho-styled haiku into the classical way in the years after.
First I will give the Romanji text and there after the English translation.


shira geshi ya   shigure no hana no   saki tsu ran

white poppy
it must have bloomed
from a wintry shower

As you can see ... this haiku is in Kanshicho-style. Let's take a closer look at the Romanji text and count the characters (syllables).

And now let us look at the English translation. Is that also in Kanshicho?

ps. I have used a syllables-counter on the www

The English haiku is also in Kanshicho. Kanshicho is just another way of writing haiku.  In our Western world we use our own way of translating the Japanese haiku and that's not always following the classical syllables-count. So maybe we can say that all Western haiku are in Kanshicho?
Well maybe, but as you and I know, in the Western world we have a lot of classical written haiku, sometimes convulsively counted to serve the rules of the classical syllables-count 5-7-5. I am not a fan of that classical style, counted verse, but I do like to write them sometimes. To me the classical way of writing haiku is very difficult. Maybe that's because English isn't my mother tongue.
By the way. The haiku written by Basho, the one in this episode, was published in a three-volume collection of haikai by Ochi Etsujin in 1717.

As you may know, my dear visitors, I write in every episode of Basho Revisited a haiku inspired on the one by Basho and that I try to write that new one in the Spirit of Basho's haiku. I would love to share here a classical counted haiku, but ... well I didn't succeeded in that task. So I have composed a new haiku in Kanshicho-style with a touch of Basho's Spirit in it.

Awesome! Gorgeous haiku in Kanshicho-style. Hope you enjoyed the read and of course the whole episode.

Also published and shared on:


A new episode in Basho Revisited. It's a long time ago that I wrote an episode but now ... it's time again. Since the beginning of October 2012 I have a new weblog Carpe Diem, seize the day, a daily haiku meme. Here I give an every day theme or prompt and once in a week the theme is 'Carpe Diem, special' in which I share a haiku written by one of the haiku masters. For this first Carpe Diem month I have chosen for haiku written by Basho. So let's take a look to this week's Carpe Diem 'special'.

The given haiku Basho wrote when he was 33 years old, a mature man, and he had contributed it, together with 19 other verses,to a colossal poetry contest arranged by Fûko (a rich daimyo patron). The contest was entered by over 60 poets. Kigin and Saiganji Ninko were the referee-judges.
After the contest father and son Ninko created an Anthology of the results called Roppya kuban Haikai Hokku awase (The Hokku contest in Six Hundred Rounds). It was shown that of the twenty verses Basho entered nine were published, placing him as one of the best of the participants and that made him an established master.

That's for the background ... now back to the given haiku for this week's Carpe Diem 'special'. First I will give the Japanese verse in Romanji followed by the English translation.

'Toshi' refers to a very fragile paper made in China. The idea of the poem was that even a fragile twig could tear the paper or the twigs were too fragile to hold on to the Autumn leaves.

I can picture this scene in front of my eyes. A stormy Autumn day, the fragile twigs, elastic as they are, ruining the scarlet papers or the soft skin of the tree, but can't stand to hold up their leaves. Fragile as the twigs are they finally break taking with them in their fall the fragile paper or skin of the tree.
To write a haiku inspired on the one by Basho, in his Spirit so to say, isn't easy, but I have to try it of course ...

autumn winds -
colorful leaves struggling
their end is near