Basho Revisited, the sound of water

You remember for sure Basho's haiku 'Old Pond':

an old pond
a frog jumps in
the sound of water 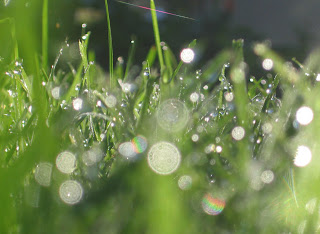 with my bare feet
in the cool grass of dawn
Ah! what a feeling

Not bad I think. A well balanced haiku written in a sleepless night. Is this in the Spirit of Basho? Yes, I think so ...