Basho was very interested in Zen-Buddhism and in his haiku you can read the Zen if you want to read that of course. Zen is in my soul. I am not a Buddhist, but I appreciate the spiritual thoughts of Buddhism.

In the following haiku by Basho he longs to see the face of a god in a flower. I think one can see a god in everthing around us and in all humans. I can see the face of god in the flowers, the trees, the birds, the insects, the animals and also in humans. I belief that in everything and everyone God is present.

It's almost a sin to write a new haiku with this one as inspiration, because I love this haiku by Basho. It's not a well known one but surely it's one of his most wonderfully crafted haiku. 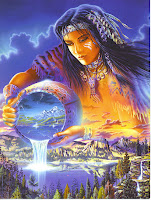