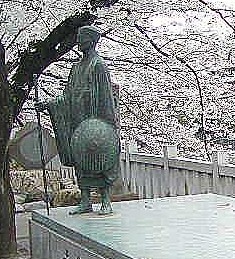 
surely star-lovers
using as a rug
a deer skin

This one, written in Summer 1681, shows us how Basho and his lover are laying down on a deer skin watching to the stars at the Tanabata festival. It's a haiku about love and situated at the time that, the so known 'star-lovers' Altair and Vega are meeting eachother to make love.

Basho talks here about a young guy which he has met after one of his travels. He compares this young guy with a wild violet.
Ofcourse these are just a few of Basho's haiku in which Basho's love for man and especially young guys is clearly used as a theme.

I will not write a new haiku myself in this part of Basho Revisited. So I will give another haiku by Basho in which his homosexuality is clear, but hidden in wonderful words.

At second thought I will try to compose a new haiku by myself in the same tone as Basho’s.