BASHO REVISITED, a new challenge part one: "a midday nap" 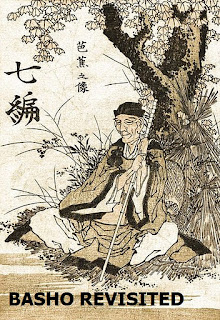 Matsuo Basho (1644-1694) was a haiku master and had several new ideas for writing haiku. One of his ideas was the Kanshicho-style in which he wrote haiku in a different way than we (all) know it.
As we (all) know haiku has three sentences with 5-7-5 syllables, but haiku written in Kanshicho-style were different. The three sentences could count, for example, 6-4-10 syllables or 3-11-5 syllables.
I embraced the Kanshicho-style when I wrote my first English haiku. I think that was in 2005 when I started my first haiku website on MSN-groups. The first English haiku I ever wrote was the next one:

Notice the syllable count 6-5-4.
In that same year (2005) this haiku was translated into several languages, for example, Hindi, Tagolog and Scottish and also in Dutch (my maiden language). At that moment I realized that I could be a well known International Haiku poet and remained writing my haiku in English.
The years following were with ups and downs, but I remained writing haiku in English, but mostly in Dutch. I also began to translate haiku of other haiku poets into Dutch, French, German and Spanish.

As you all should have noticed Basho's my 'role-model', my 'idol'. Several fellow haiku poets have told me that my haiku are touched by Basho's Spirit. In other words my haiku according to fellow haiku poets, are in the same tone and sphere as Basho's. I am honoured that fellow haiku poets are so positive about my haiku.
Basho wrote almost thousand haiku in his lifetime, mostly in the last ten years of his life. A big part of those haiku he wrote during renga sessions and while he was travelling through Japan. He wrote several haibun about his travels. His most well known haibun is titled "Oku No Hosomichu", "The Narrow Road to the Deep North". "The Narrow Road" was and is still a classical one.

One of his most known haiku "the old pond" he wrote shortly after he moved to Edo in 1682:

the old pond
a frog jumps into
the sound of water

It's a famous haiku of Basho and it was one of the first haiku I ever read. It stimulated me to write haiku myself.

chilly coolness
my feet on the wall
a midday nap

Basho wrote this one in the midst of July 1694. Several months later he died on October 12.

'a midday nap' is not a well known haiku of Basho, but in my opinion it's a wonderful one. He goes back to the essential element of summer heat ... to cool down. In this haiku the cooling down comes from the cool wall to which he is putting his feet. It's just the simple experience of the cool wall on a hot summerday.

this summerday
the heat makes me drowsy -
the cool stone wall

I think this haiku has the 'Basho Spirit', but it's not mine to decide if that's true. Maybe you, my visitors, can give me comments on this one.