In Basho's time figurines made of paper maché were popular. There were even ones with their heads balanced separately so they seemed to nod. Maybe you have once made such a figurine of paper maché.
When I was young I made surprises with paper maché to use them to hide a gift or present.
In one of Basho's haiku he mentions a cat made of paper. This one was written in autumn 1681.

made of paper
the cat seems to know
an autumn morning

Picture this haiku. I think that Basho was sitting on the verandah in front of a house of one of his friends or disciples. Or maybe he was sitting in front of his own banana tree cottage. In front of his eyes he sees a cat of paper maché that's nodding his head in the autumn wind.
I think this is one of Basho's best haiku and it can easily compete with for example the haiku 'Old Pond' or 'On a Withered Bough'. It's a shame that this haiku is not so well known.

Can I write a haiku like this? I don't know, but I will surely give it a try. 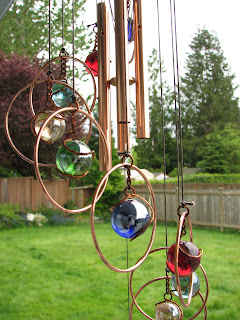 an autumn evening
in the westerly wind
the wind chime

In this haiku, I think, I have touched the tone and sense of Basho's 'paper cat' with a complete different picture of the wind chime.