Basho Revisited, this door of grass

As I mentioned in the previous episode of Basho Revisited I will use haiku from Basho's 'Narrow Road to the Far North'. In this episode I will tell something about the first verse which he has recorded for the haibun 'Narrow Road'.

Basho had a lot of friends and disciples at the time that he went on his journey to the far north. They all had come to visit him and to say goodbye. many of them had presents and gifts for Basho. Things he could use on his journey.
They accompanied him on the first two or three miles, say the first 10 km. When he went off he wrote:

When Basho left his Banana tree cottage, he turned it over to Heiemon, who was married with a family. Thus, already, in Basho's bachelor quarters was the red ramp put up for the festival of the dolls for the girls of the family.
Basho and his good friend and student Sora left in this journey on May 16th. This verse fits with Basho's first sentence of the book: 'The months and days are the passing guests of a hundred generations, and the years that come and go are travelers, also'. (Source: Jane Reichhold's Old Pond: Basho's (almost) thousand haiku).

I wrote, as I stated in the previous episode, my own version of 'The Journey to the Far North'. The first verse I wrote for 'My Narrow Road' (after the preface) was:

the last night
I couldn't sleep -
a Nightingale sings 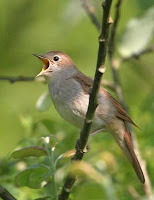 followed by a verse with farewell words:

a farewell verse
scribbled on a receipt
don't forget me

I wonder ... it's for sure a haiku in the Spirit of Chevrefeuille :), but is it the same as Basho's?