In this series Basho's love for man, especially young guys, has been talked about. In some of hisd haiku that love is clearly the theme, but in other ones it isn't so clear. In the following haiku, which he has written in autumn 1689, his preference for man could be the theme, but in the third sentence ... you can read the real theme.

It was the 'hokku' of a 50-link renga done by 11 poets at the home of Kansei, a poet in Kamotsu. The euphemism 'to get wet' was often used in tanka (another Japanese verse with five sentences 5-7-5-7-7) where the reader could decide how this happened - either from rain or dew on flowers or tears or sexual activity. This verse uses the 'maekuzuki' technique in that the first two lines make the reader think one thing, but the addition of the third line explains a natural occurrence.
This 'maekuzuki' technique makes this haiku a wonderfully crafted and composed verse in which the poet paints a picture that confused the reader. I love this technique and I love this haiku very much. I will try to write a new haiku with the 'maezukuzi' technique. Again a tough one. 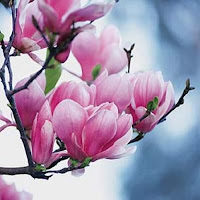 Ah! such a beauty
the white face of a geisha
magnolia in bloom


I wrote this haiku in the middle of the night. I couldn't sleep, but I was inspired and tried to write the above haiku in 'maekuzuki' technique. I wonder what will bring the next day or night?
Haiku isn't just a poem, it's a life style. As Basho did in his lifetime I do in my lifetime writing haiku, breathing haiku, living haiku. Haiku is A life style.